A timing belt is a part of an internal combustion engine that controls the timing of the engine's valves. Timing belts replaced the older style timing chains that were common until the 1970s and 1980s (although in the last decade there has been reemergence of chain use for many carmakers). 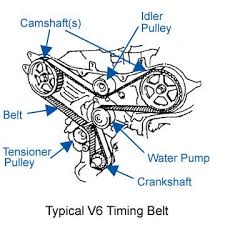 In the internal combustion engine application, the timing belt/chain connects the crankshaft to the camshaft(s), which in turn controls the opening and closing of the engine's valves. A four-stroke engine requires that the valves open and close once every other revolution of the crankshaft. The timing belt/chain does this. It has teeth to turn the camshaft(s) synchronised with the crankshaft, and is specifically designed for a particular engine. In some engine designs, the timing belt may also be used to drive other engine components such as the water pump and oil pump.

Timing belts must be replaced at the manufacturer's recommended distance and/or time periods. Failure to replace the timing belt can result in complete breakdown or catastrophic engine failure, especially in interference engines. The owner's manual maintenance schedule is the source of timing belt replacement intervals, typically every 60,000 to 90,000 miles (approx 96,000 to 144,000 kilometres). It is common to replace the timing belt tensioner at the same time as the belt is replaced.

The usual failure modes of timing belts are either stripped teeth (which leaves a smooth section of belt where the drive cog will slip) or delamination and unraveling of the fiber cores. Breakage of the belt, because of the nature of the high tensile fibers, is uncommon.Correct belt tension is critical - too loose and the belt will whip, too tight and it will whine and put excess strain on the bearings of the cogs. In either case belt life will be drastically shortened. Aside from the belt itself, also common is a failure of the tensioner, and/or the various gear and idler bearings, causing the belt to derail.